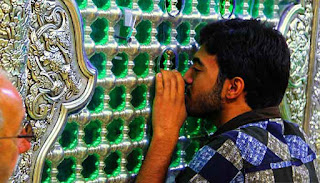 I have written this most of post previously on my blog - “Ziyara of Fatima during prayer” - but I will refocus it on Dua al-Tawassul, as the content applies.

In Part 2 of my “Allama Majlisi Revived My People” series, I show how Dua al-Tawassul is traced back much earlier than the author critiquing claims.

And in this post, I will tackle his claims with regards to the content of Dua al-Tawassul - (1)  having no basis in content of supplications in earlier books, (2) does not contradict the Quran.

To clarify how Ziyarat are a form of Dua (supplication to Allah), and thus permissible to recite in prayers dedicated to Allah.

Let us refer to the following Ziyara of Amir al-Mu’mineen mentioned in al-Kafi (1). I mention key parts of the ziyara, not the ziyara in its entirety:

“(Another Dua) (Near the grave of Amir al-Mu’mineen)

I testify that you are the Hujja of Allah and his witness over His slaves ..

I have come to you O Amir al-Mu’mineen, knowing of your right, enlightened of your cause, bearing enmity for your enemies, and allying with those whom allied with you.

May my father and mother be sacrificed for you [O Ali], I have come to you seeking refuge through you from hell which I deserve because of the crimes I committed against myself [i.e, sins].

I have come to you as a visitor due to the greatness of your status and place with my Lord. So intercede for me with your Lord, as I have many sins. And you have with Allah a known and great status, and accepted intercession. And as Allah says, ‘They [i.e, honored servants] do not intercede except to whom He wills’.

Oh Allah, Lord of the Lords, one whose beloved ones scream for, I seek refuge of the brother of your Messenger a refuge thar saves my neck from hellfire. I believe in Allah and what was revealed to you [Ahlulbayt], and I ally with the last of you [Imam Mahdi] just like I allied with the first of you [Imam Ali]. And I have disbelieved in al-Jibt, al-Taghut, al-Lat, and al-Uzza [i.e, Abu Bakr, Umar, Aisha, and Hafsa].

The above supplication invokes Allah directly:

The supplication also directly invokes Imam Ali, asks for his intercession, and invokes the Ahlulbayt:

Despite invoking Amir al-Mu’mineen directly, and asking for his intercession, Shaykh al-Kulayni classifies this supplication as “Another Dua”.

Nope, there is a whole chapter of Ziyarat in al-Kafi. In addition to scattered ziyarat in other chapters.

“Narrated Ali ibn Ibrahim, from his father, from Ibn Abi Umayr, from Hammad, from al-Halabi, from Abi Abdillah that he said:

Al-Halabi said, ‘I have heard him another time saying [with regards to what to say in two sajdahs of al-sahw]:

By the name of Allah, and by Allah, peace be upon you O Prophet and the mercy of Allah and his blessings.’”

As we know, the two sajdahs of al-Sahw are the sajdahs you must partake in if you were for example daydreaming during prayer and didn’t pay attention to number of rak’at, etc. It is necessary to validate your obligatory prayer.

Yet, you are addressing the Prophet directly during these sajdat - the sajdahs intended for Allah alone. As it is a form of worshipling him.

How would this work?

Ziyarat & addressing the Prophet directly here must be a form of dua.

The Prophet is physically dead.

However, he is alive with his Lord by virtue of being a martyr. As the following al-Kafi (3) hadith specifies:

‎‘And never think of those who have been killed in the cause of Allah as dead. Rather, they are alive with their Lord, receiving provision’.

‎And I bear witness that Muhammad died a martyr.

And by Allah, he will come for you.

So rest assured, if he came to you, that Shaytan cannot take his [Muhammad’s] image.

[The Prophet] then told Abi Bakr:

‘Believe in Ali and 11 of his progeny, for they are like me except in Prophethood.

And repent to Allah from what is in your hands [i.e, rulership] - for you have no right in it’.

He said this and said [what he said], and was not seen after”

The above hadith highlights how the Prophet (and by that virtue, the Imams) being alive with their Lord - entails that they can be involved in dunya, even after their physical deaths. As evident by the physically deceased Prophet speaking to Abu Bakr.

The Prophet is alive with his Lord, thus he can only communicate with dunya - by Allah’s will & permission.

Thus, if you are addressing the Prophet directly in Ziyara.

As they are alive with their Lord - and thus communicate with us - only by Allah’s permission.

“˹But˺ those ˹objects of worship˺ they invoke besides Him have no power to intercede, except those who testify to the truth knowingly” (43:86)

The mushrikeen when they invoked their pagan gods directly - their gods had no effect. Why? Because they were mere idols.

However, when they for example invoked angels - angels *do* have power of intercession when invoked directly. However, they only answer the call of those whom Allah approved.

“Perhaps some of them [i.e, Mukhalifeen] will ascribe shirk to those who say it is permissible to seek the intercession of the Prophet, his progeny, honored allies of his ummah, and decreed that seekingintercession from them in the needs of dunya and akhira. And ascribe shirk to them because the verse and parallel verses are addressed towards a mushrik audience.

It is as it is hidden from them that Allah proved intercession can happen he gives it permission - without restricting it to dunya nor Akhira. As Allah said: “Whom gives intercession except with His permission?” (2:255)

For a much more detailed discussion on istighatha in the Quran and how it falls under the “intercession” label in the Quran, please check my pinned posts on Twitter.

This is what I think