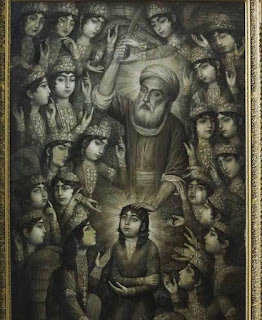 We have understood in my last articles that the Imams shared ‘subjective’ and ‘objective truths’ with their followers.

For one to achieve true enlightenment and understanding of the Imams, objective truth must be sought.

That truth is found through following the ahadith transmitted from the Imams by their holy gates (the Babs).

As the Imams said:

“There is no excuse for our followers to doubt what our thiqat (i.e, Babs) narrate.

They have known that we share our secrets with them and carry it over to them.”

However, why must we not doubt the Bab’s words? Are they not humans who can forget and err?

Even if secrets of the Imams were shared with them - could they not deviate in the future?

Or are they infallible beings who cannot forget, err, lie, nor deviate?

To answer these questions, we will learn:

(1) The basis of the Babs’ appointment

(2) The nature of their being (infallibility or not).

1 ) Basis of the Babs’ Appointment

The basic message of Quran teaches us that - spiritually speaking, Islam equates ‘life’ (being alive) and any path but Islam is ‘death’.

“And [mention] when Abraham said, "My Lord, show me how You give life to the dead." [Allah] said, "Have you not believed?" He said, "Yes, but [I ask] only that my heart may be satisfied." [Allah] said, "Take four birds and commit them to yourself. Then [after slaughtering them] put on each hill a portion of them; then call them - they will come [flying] to you in haste.”

Imam al-Sadiq defines the dhahir interpretation of this verse as God being capable of granting physical life and death.

But the Imam specifies that the batin interpretation of that verse is that Allah tells the Imam to appoint 4 individuals who are able to handle difficult ahadith.

To send them to different ends of the earth, and make them his (the Imam’s) hujja over the people.

These hujjaj of the Imam - entrusted with his difficult ahadith and secrets, and appointed to God the Shi’a - are his Babs.

If the Imam ever wishes to summon them, he will say Allah’s Greatest Name and they will supernaturally appear within a moment at his doorstep - no matter where they are on Earth.

“The (believers) said (to prophet Ibrahim): O Prophet of God, you have brought us to life, may God bless you.

He (the Imam) said, peace be upon him, the verse’s batin interpretation is:

Take four of those who can handle the difficult ahadith, and entrust them with your knowledge, then send them to the ends of the Earth as hujja for you (O Imam) over the people.

And if you want them to come to you, call them by the Greater Name (al-Ism al-A’dham) and they will come to you readily”

When the Imam appoints a hujja of Allah over the people to represent him in word and action, he must be perfect.

If the Bab is the Imam’s proof (hujja) over the Shi’a, then naturally the Bab’s mistakes must reflect over the Imam.

Thus - the Bab can make no mistake. Yet, how is this possible if the Bab were a mere human?

To understand, let us take a look at the following hadith:

“Narrated Amro ibn Shimr (a prolific narrator on the authority of Jabir):

A man came to Jabir ibn Yazid and Jabir said to him:

Do you want to see Abu Jaafar [al-Baqir]?

[The man] said: So he (Jabir) wiped my eyes and I passed as I was ahead of the wind until I reached Medina.

He (man) said: So I remained amazed when I thought - ‘Since I am here, I will need to a stake to plant my tent, if I intend to perform Hajj in the next year. So I looked to find my stake’

Without notice, I saw that Jabir was grabbing my hand giving me a stake.

He (the man) said: I was terrified.

Then I walked until I reached the house of Abi Ja’far [al-Baqir] and  he was shouting at me: ‘Enter, there is nothing wrong with you.’

I entered the Imam’s house only to see that Jabir was with him.

Whatever you break, fix it.

Then he (Imam) said: He who obeys God is obey.

The Imam asked the man: Which of the lands is most beloved to you?

He (Imam) said: At Kufa you will be present (shortly).

He (Jabir) said: I heard the brother of Nun (i.e, Prophet Yunus) is in Kufa.

I remained amazed at what Jabir said, so I came and saw him in the place where he was sitting (before our trip to Medina).

I asked the people, did he rise or step down from the place he was ?

(The narrator says): The reason for my idea of tawhid is that I heard Jabir’s belief in the divinity (godliness) of our Imams”

Let us begin by first recalling Allama Majlisi’s commentary on this hadith where he says:

“Al-Kashi or al-Tusi (since he reconstructs al-Kashi’s work) have commented that “this is a fabricated hadith”.

There is no doubt that it is fabricated, as it speaks of reincarnation and there is corruption in its words and meanings. Thus, we do not seek to explain it”

We learn several important aspects of the Babhood from Jabir in this hadith:

First, Jabir is not a mere fallible. But of prophetic status.

As confirmed by Majlisi’s analysis, the hadith suggests reincarnation.

Thus, it would mean that Jabir is a reincarnation of Prophet Nuh. And that there was another person (a Bab) who was a reincarnation of prophet Yunus present in Kufa. Thus, there is an indication in the hadith of that the Babs are body forms of previous prophets.

It is quite ironic seeing Majlisi believe this hadith is fabricated.

After all, Majlisi is known for his extreme Akhbari lens which lead him to take upon many ahadith, seen as outrageous to outsiders.

Under what pretext does he believe in such ‘outrageous ahadith’?

“These reports does not contradict what has passed regarding the story of the female jinni, because it is a hidden story which they (Imams) taught only the elite of their companions.

Thus, it was not used in argument against Mukhalifeen, and perhaps they (Imams) were wary of revealing such matters to even most of the Shi’a as well.”

So why did Allama Majlisi not apply the same logic to the above hadith? Instead, he rushed to declare the hadith as fabricated, for clearly indicating reincarnation.

Simple. The matter of the fact is that mainstream Shi’ism is an unsustainable belief if one truly digs deep into our ahadith.

As the many contradictions become, the true batin belief being taught to a few companions (the Babs, infallibles who cannot betray the Imams’ trust) becomes clear.

And most of the dhahir forming mainstream Shi’ism becomes mere scattered dust - in terms of one’s search for the objective truth.

Second, Jabir fulfills the condition of Babhood sent by the Imam as his hujja to the Shi’a.

By virtue of being able to meet the Imam within a glimpse of the eye.

If the Imam wishes for His Babs to come, he will call them by his Greater Name and they will come readily.

And if you want them to come to you, call them by the Greater Name (al-Ism al-A’dham) and they will come to you readily

Similarly, Jabir wiped (the man)’s eyes and (they) passed as (they) were ahead of the wind until (they) reached Medina.

Jabir, as the Bab, could go to Medina to meet the Imam’s within an eye’s glimpse.

He was able to hear the man’s thoughts of needing a stake from his tent without the man speaking it to Jabir.

“Without notice, I saw that Jabir was grabbing my hand giving me a stake.”

Fourth, the Bab Jabir had a belief in the Imam’s divinity. Thus, casting doubt on the objective truth about our Imams’ own nature. And that is they are not mere humans, but I will cease from discussion about this in this article.

Knowing the four above aspects about Jabir’s Babhood, let us analyze some the points raised against Abu al-Khattab - on what about him was deviant?

The purpose is not to give a personal opinion on Abu al-Khattab, but to allow the audience to individually analyze whether some of the key allegations against Abu al-Khattab necessarily deprive him of the safeer (Bab) position he was appointed to?

The Shi’a reported to the Imam that Abu al-Khattab made a number of claims, including that he heard Imam al-Sadiq telling him that he (Abu al-Khattab) had ‘ilm al-ghayb.

If he were the Bab of the Imam, then he would be a reincarnation of a prophet. Not a mere human being, thus it would not be out of the ordinary for a Bab to have ‘ilm al-ghayb.

And as the Bab, the Imam’s knowledge and secrets are entrusted to him. And as the Bab is the Imam’s hujja, his da’wah gives people spiritual life and death (as explained previously).

“And that ‘you [O Aba al-Khattab] have knowledge of the unseen (al-Ghayb).’

And that you [Imam] said regarding him [Abu al-Khattab]: ‘He is casket of our knowledge, the lodging place of our secrecy, the one who is trusted with our people's life and death.’”

The Bab Jabir ibn Yazid was revealed to be a reincarnation of a prophet, so is Abu al-Khattab’s claim of prophethood disqualify him - if he were a Bab?

“On the authority of al-Mufaddal:

‘70 men were killed along with Abi Ismail - meaning Aba al-Khattab - 70 prophets, all of them exclaimed amazement with his [Abu al-Khattab]’s prophethood’

Al-Mufaddal said: ‘We entered upon Abi Abdilah [al-Sadiq] and we were 12 men.

Abi Abdilah came to greet each man from among us, one by one, and named each man by a prophet’s name.

He told some of us: Peace be upon you, O Nuh.

He told some of us: Peace be upon you, O Ibrahim.

And he told the last man he greeter: Peace be upon you, O Yunus.

Then he [the Imam] said: ‘There is no difference between prophets’

“Narrated Ali ibn al-Hakam that al-Mufaddal ibn Umar that used to indicate that you [i.e, Abu al-Khattab and Fulan] are from the messengers’”

Given the information provided - one can understand the inviolablity of the Babs, their knowledge, and their ahadith.

The way you derive conclusions from these ahadith to figures such as Abu al-Khattab and al-Mufaddal is up to you, dear reader.