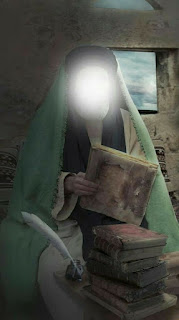 In my previous articles, we have learned that Sharia under the Imams continued undergoing changes and evolution, even after the death of Allah’s Messenger.

The Imam’s authority stems from the fact that he directly receives the same wahi which prophet Muhammad receives, on the grounds of “We are All Muhammad.”

Any change he makes must be attributed to Rasul Allah, even if Rasul Allah did not make that change in his life time.

As the representation of the Prophet, the Imam’s power is not bound to merely implementing existent commands found in dhahir (apparent) verses of the Quran.

Rather, he can be best described as a literal ‘walking Quran’ - with ability to abrogate and issue new commands, as he sees fit.

The Quran consists of both dhahir and batin (esoteric) verses. Being the Quran itself, not only the Imam may decide the meaning of the batin - but also the meaning & implementation of the dhahir.

Thus, the purpose of this article is to understand the context, rationale, and justification of equating the Quran with the figure of Imam - in order to allow the Imam to revise Sharia.

So, let us begin!

Muhammad, the Messenger of Allah, had a task over his ummah aside from his prophetic role.

Rather, “Muhammad and Ali are the fathers of this ummah” - as Imam al-Askari eloquently clarified. (Tafsir al-‘Askari, page 330).

And in his duty as Prophet, Muhammad was to follow the guidance of the prophets before him.

“These ˹prophets˺ were ˹rightly˺ guided by Allah, so follow their guidance.” (6:90)

Being so, the prophets before Muhammad strongly cared for the religious fate of their children after their (the prophets’ death).

This can be seen when “death approached Jacob, when he said to his sons, "What will you worship after me? They replied, “We will ˹continue to˺ worship your God, the God of your forefathers—Abraham, Ishmael, and Isaac—the One God. And to Him we ˹all˺ submit.” (2:133)

Taking up the guidance of his prophetic predecessors in caring about the religious fate of his children after his death, the Prophet made a speech on his Farewell Pilgrimage.

Nearly approaching death, he urged the believers of his ummah (his spiritual children) to follow two things in order to not be led to error after him:

The book of Allah and the Prophet’s family.

“I (Prophet) leave among you two matters which, if you cling to them, you shall not be led into error after me.

The book of Allah [Quran] and my progeny, my Ahlulbayt.

For indeed, Allah - The Kind, the All-Knowing, had promised me that they (Quran & Ahlulbayt) will never be separate...”

When one looks at this famous hadith (Hadith al-Thaqalayn) in the hadiths of Sunnis, he may come under the illusion that advised the believers to take upon two separate matters: Quran and Ahlulbayt.

However when one looks at our Shi’i ahadith, we can see that the Prophet clarified that “they (Quran & Ahlulbayt) will never be separate”.

Why mention them separately then?

It is a Quranic style of using the word “and” to describe the exact same matter.

As in the verse below: ‘Those who do not expect the meeting with Allah’ are not different from ‘those who are heedless (unaware) of Our signs.

Both of their fates is hellfire.

“Indeed, those who do not expect the meeting with Us and are satisfied with the life of this world and feel secure therein and those who are heedless of Our signs.

For those their refuge will be the Fire because of what they used to earn” (10:7-8)

However, God mentions them separately to draw emphasis to these attributes - even though in essence, they are one. Not separate.

But in order to emphasize that the Quran (a weighty thing) cannot be understood alone but only with another equally weighty thing (the Ahlulbayt). Hence, the Thaqalayn (two weighty things) are formed.

Thus, the Quran and Ahlulbayt are outwardly two matters but in essence - they are one.

Why? Because the Ahlulbayt are in unison with the Quran, they are walking living Qurans who tell us what each verse (in its dhahir and batin meaning) are.

Now, one may argue that the fact the Quran cannot be understood alone or that batin interpretations offering a contradictory explanation to the dhahir makes it “opaque”.

Meaning, the Quran is obscure and cannot be understood. And in that case, do we even know what Islam is?

The answer to this is that the Quran revealed to Muhammad and the Prophet taught to Muslims, included dhahir and batin interpretations.

In general, it revealed everything the ummah will ever need for their existence.

The Prophet transmitted this knowledge to Imam Ali, who regarding his compilation of the Quran:

“Whatever verse was revealed to Rasul Allah - from verses of the Quran - except that he recited it to me, and dictated it to me.

So I wrote it with my handwriting. And he gave me knowledge of its ta’wil (batin interpretation), tafsir, nasikh and mansookh (abrogated verses), its muhkam and mutashabih, and its general and specific.”

The Sahaba objected, exclaiming they already have their own comprehensive mushafs. That they do not need Ali’s - mushaf which includes all the knowledge of the Quran (including the batin).

“Ali (peace be upon him) brought it (the Quran) out to the people after he finished writing it down, so he said to them:

This is the book of God Almighty as [God] revealed it to Muhammad (may God bless him and his family).

They (Sahaba) said: ‘We have a comprehensive Mushaf [i.e, Quran] already, we have no need for your Mushaf (O Ali)’

He said, By God, you will never see it (my Quran compilation) after this day of yours, but I had to tell you when I gathered it for you to read it”

Something becomes clear now. That is the Quran in the Sahaba’s after the Prophet’s death is only a mere fraction of what it was during his lifetime!

Rather, the whole Quran - Kitab of Ali was passed from Imam Ali to his Imam successors, until it reached the Qa’im.

But aspects of it - the ta’wil (batin) - was kept a secret from the Mukhalifeen. And only taught to the Imam’s Shia.

The batin is continuously evolving, as it “travels with precision, like the Sun and Moon”. It contains knowledge of the past and future.

He [al-Baqir] said: Its dhahr [is so and so], and its batn is its ta’wil - it includes what had passed, and what has not yet happened. It travels with precision, like the Sun and Moon.

This is the meaning Allah’s verse: ‘And none shall know its ta’wil except Allah and those firmly established”

Abu al-Khattab is teaching teachings that the Imam is supernaturally transmitted new knowledge about Quran & matters of halal and haram.

The Imam confirmed that Abu al-Khattab’s statement is valid:

The knowledge and commandments of the Quran change, and those related to halal and haram (from sunnah), also undergo evolution and change.

This is because like every single day and night involves new situations that require new knowledge.

This new knowledge is supernaturally transmitted to each Imam.

The following hadith of sahih clarifies:

Abi Ja’far [al-Baqir] said that the Messenger of God, is the best of those firmly rooted in knowledge. He knew all that God had revealed to him of tanzil and ta’wil.

God would not reveal to him (the Prophet) except that he taught him its ta’wil.

And his awsiya’ (successors) know it (the Quran & its ta’wil) all.

I (narrator) said: May I be sacrificed for you, Abu al-Khattab said about you a great matter.

I (narrator) said: He says that you know the science of halal and haram and the Qur’an (i.e, supernaturally transmitted this knowledge).

He (Imam) said: Knowledge of the halal and haram, and the Qur’an, go hand in hand with the knowledge that occurs at night and during the day.”

In this sahih hadith, Al-Sadiq confirmed his father’s words that the Imams receive new knowledge related to the Quran & halal and haram.

He (narrator) said: “He (Abu al-Khattab) says that you (Imam) know what is permissible and what is forbidden, and judgement between people” (i.e, supernaturally transmitted it)

When I tried to get up, the Imam grabbed my hand and said:

Knowledge of the halal and haram, and the Qur’an, go hand in hand with the knowledge that occurs at night and during the day”

It becomes clear that Kitab Ali is not only an actual book, but rather is symbolic of the Imam’s person.

As the knowledge (Quran & halal and haram of the sunnah) that was present with Rasul Allah is supernaturally transmitted to the Imams.

Rather, the Imam can address new issues by issuing ahadith and commands contradicting those of Rasul Allah.

These new commands must be attributed to Rasul Allah, as the Imams issue them based on prophetic wahi they receive in “every year, every month, and wallah - every hour”.

I (narrator) said: “May I be sacrified for you.

He (Imam al-Sajjad) said: “Yes, including the increase in knowledge (supernaturally transmitted from the Imams’ predecessors) - that occurs in every year, every month, and by Allah, even in every hour.”

Because the Imams receive direct wahi from the Prophet (who is alive with his Lord) on new matters.

They have the authority to abrogate commands which the Prophet made during his lifetime.

That would be possible, and we would see the Imam’s designation being as if the Prophet himself made this designation. Hence, we would accept it and see it as binding.

I said to him (the Imam): What is the matter with people who narrate on the authority of so-and-so from the Messenger of God, peace and blessings be upon him and his family - and are not accused of lying - yet something contradictory to it comes from you?

Thus, upon the idea of the Quran and sunnah’s daily evolution being the core of the ta’wil of the Quran - the Imam could use his prerogative in defining the batin to change sharia as he wishes.

This was Abu al-Khattab’s idea of the batin, and his Imams confirmed the validity of his teachings in the discussed sahih ahadith.

The batin is not something “opaque” which clouds the true meaning of the Quran.

Rather, it is its most integral component that existed from the time of Rasul Allah, and ensured the Quran’s survival into the time of the Qa’im - by allowing for continuous change, relevant to the era of each Imam.

The concept of the Quran’s batin evolution may sound strange, but then again - our Imam al-Sadiq says:

“When the Qa’im rises, the one who thought he belonged to our matter (the Mahdi’s state) will leave it.

What if the person or groups you personally see as a ‘Ghali’ - are actually not Ghulat, but those who are venerating the Imams the way the Imams want to be venerated?