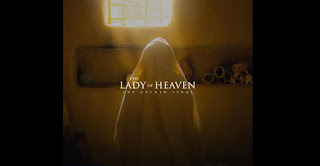 As-Salamu Alaykum brothers and sisters,
My deepest condolences on the martyrdom of Lady Fatima (as), may Allah increase all your deeds in these holy sacred nights.
Today's blog post will be about a long narration of the grief Lady Fatima faced after the Holy Prophet (sa) passed away.
Reading this hadith and putting it together was very hard on my heart. I'm a sinful servant, and I couldn't bare reading the narration easily without aching and shedding tears. I cannot imagine the state of our Master Imam Saheb al-Zaman in these holy nights. May Allah ease your heart O'Master of Time and may Allah hasten your reappearance.

Ma'ani al-Akhbar:
My father has narrated from Sa'd from ibn 'Isa from Muhammad ibn Yunus from Hammad a similar Hadith.
Warqah ibn 'Abd Allah al-Yazdi has said, “I travelled for al-Hajj of Bayt Allah al-Haram seeking rewards from Allah Lord of the worlds. During Tawaf I saw a young woman of brownish complexion, of a charming face, sweet talking, who pleaded in her eloquent words,
"O Lord, of al-Ka'bah al-Haram and honorable protectors, Lord of Zamzam and the station and the great reminders (of Allah), Lord of Muhammad the best of all people, I plead before you to raise me with my masters, the purified ones and their sons, the blessed ones who possess marks of nobility. O group of pilgrims for al-Hajj and al-'Umrah take notice that my masters are the best of the chosen ones, the purest of virtuous ones. They are the ones whose values are above all values, who are spoken of in other cities as dressed in the gown of pride."
Waraqah ibn 'Abd Allah has said that he asked her,
"O young lady, I think you must be of the friend of AhlulBayt (family of the Holy Prophet). Am I correct?"
She replied, “Yes, that is correct."
I (the narrator) then asked, “Who are you. Are you one of their Mawali?"
She replied, “I am Fiddah, the housemaid of Fatima (as), daughter of Muhammad al-Mustafa' (the purified one), O Allah grant compensation to her, her father, Muhammad and her husband and sons."
I then said, “You are most whole-heartedly welcome. I had a great yearning to hear your speech and the manners you speak, so I request you to give me an hour time to answer my question that I will ask you. So when you finish Tawaf please wait for me in the food market until I come and Allah will grant you reward for it."
We then parted each other.
When I completed my Tawaf and I wanted to return to my lodging I then made my path through the food market and I found her sitting a little away from the people. I then went to her and I then sat a little away from the people and I presented to her a gift. I did not think it was Sadaqah (charity).
I then said, "O Fiddah, please tell me about your Mawlat (owner, guardian) Fatima(as)."
Waraqah has said that when she heard my words her eyes became flooded with tears then she sobbed and wailed and said,
"O Waraqah ibn 'Abd Allah, you just have disconcerted my calmed down sorrow and grief and the pain that existed in my heart. Now listen to what I had observed from Fatimah, Alayha al-Salam.

Take notice that when the Messenger of Allah (sawws) passed away, the small as well as the grownup people suffered shock, weeping for him became a great deal, but very little solace; the loss was greater for the near ones, companions, well-wishers and friends, the relatives and non-relatives, everyone you would meet was weeping, or wailing.

There was no one of the people of the earth, the companions, relatives, and friends suffering more intense grief, weeping and sobbing than my Mawlat, Fatima (as).

Her sadness and grief would renew, and increase her weeping. For seven days her wailing did not calm down and her compassionate feelings did not become quiet. With every new day her weeping would become more intense than the day before.

On the eighth day she expressed her grief when her patience snapped. She came out and cried as if from the mouth of the Messenger of Allah (sawws) she was speaking. Women hurried toward her, children came out and people grumbled weeping and sobbing. People came from all directions, the lamps were extinguished so that no one can see the faces of the women. Women thought as if the Messenger of Allah (sawws), has risen from the grave. People were freighted and confused because of the difficult condition with which they were faced. She would call and wail for her father,
O father, O the chosen one, O Muhammad! O abu al-Qasim, O the spring for the widows and orphans.
Who is there after you for al-Qiblah (al-Ka'bah) and the place of Salat (formal prayer) and who is for your grief
stricken wailing daughter!
"She then moved forward but stumbled over the back piece of her garments while unable to see anything because of the tears continuously following until she was close to the grave of her father, Muhammad (sawws).
When she looked at the room she also saw the minaret. She then made her steps shorter and continued sobbing and weeping until she fell unconscious. The women then rushed towards her sprinkled water on her chest and forehead until she regained consciousness then she stood up saying,

"My power has diminished, my self-control, has betrayed me, the enemy rejoice seeing my condition and aggravation kills me. O father, I am left in grief all alone disoriented and lonely. My voice has subsided; backing for me is cut off. My life has become unpleasant my environment has become depressing.

After you, O dear father I do not find any comforter for my fearfulness, or a helper in my weakness. After you there is no more clear divine revelation as well as the descent of Jibril, and the coming of Michael. After you, O dear father the means have turned backward and the doors are shut before me. After you I dislike the world and for you I breathe with tears, my yearning for you does not diminish as well as my grief and sadness.'

She then called, 'O father, O my intelligence! She then said:
My sorrow for you is new, my heart, by Allah, pour down persistently,
Every day my anxiety increases and my pains do not diminish,
My bitterness has become great and solace has become contrary, so my weeping every time is new,
The heart that joins patience for you or solace indeed is icy cold and daring.
"She then called, 'O dear father, the world has cut off its light with (your passing away) and its shine has diminished; its beauty, and grace was because of you. Its days have become black so its wet and dry copy its darkest night.
O dear father, I continue living sorrowful for you until I meet you, O dear father my endurance has vanished after my separation from you. O dear father, there is no one for the widows and the destitute and there is no one for the nation (followers) up to the Day of Judgment.

After you O dear father every day we live as the suppressed ones, O dear father, people turn away from us, with you we were great among the people. Now we are the suppressed ones. What kind of tears are they that because of separation from you give a chance and what kind of grief is it that after you does not remain continuous, what kind of eyelash is it that after you rest for sleep.
You were the spring of religion, the light of the Prophets. Why the mountains do not pass flying and the oceans do not dry up and the earth does not quake.
Your passing away has caused great bitterness and the sorrow has not been of a small degree. Your passing away has brought great tribulations and gross neglect.
The angels have wept for you, O dear father and the orbits are as if stopped. Your pulpit after you is dreadful, and the place of your Salat (formal prayer) is devoid of your whispering to Allah, your grave is happy to hide you, the garden (paradise) is yearning to have you and for your prayers and Salat (formal prayer).
O dear father, how great has become the darkness of the place where you would sit. Alas, we are sorrowful until very soon I will meet you.
Abu al-Hassan is bereaved, the trusted one and the father of your grandsons, al-Hassan and al-Husayn (as), your brother, your friend, the beloved one to you whom you brought up since his childhood, and chose as your brother when he grew up, the most sweet one among your beloved ones and among your companions of earlier Muhajir (immigrants) and al-Ansar (people of al-Madinah).
Bereavement has encompassed us all and weeping has become murderous for us and sorrowfulness has gripped us.'
"She then kept breathing hard and groaned with which her spirit almost left her body.
She then said,

'My patience is reduced to very little and solace is moved away from me after my eyes have missed the seal of the Prophets. O eyes you must shed tears a great deal, fie up on you if you did not allow blood to flow instead of tears.