Fatima, Master of the Former Peoples 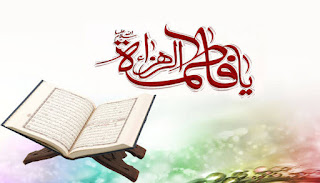 May Allah’s peace and blessings upon you all.

Today’s post will be about a hadith a brother suggested from page 668 of Al-Amali by Shaykh al-Tusi, and it is as follows:

“Narrated Aba Abdilah [al-Sadiq] (as): Allah made a quarter of dunya [the world] to be the mahr of Fatima, and indeed it was a quarter intended for her.

And gave her heaven and hell as mahr.

She sends her enemies to hell, and sends her awliya’ to heaven.

And she is the great Siddiqa [steadfast affirmer  of truth].

And upon her ma’rifa did the former generations revolve

A. Who are the ‘former generations’?

The answer lies in the following verses:

“And We gave Moses the Scripture, after We had destroyed the former generations” (28:43)

The ‘former generations’ are the civilizations of prophets before Musa - to whom God extensively spoke to [i.e, gave him commandments encompassing all aspects of life], as 4:164 indicates وكلم الله موسى تكليما.

After all, Allah sent down al-Furqan upon Musa:

“And [recall] when We gave Moses the Scripture and al-Furqan that perhaps you would be guided” (2:53)

‘Al-Furqan’ refers to a scripture that distinguishes between falsehood and truth, with its extensive message snd commandments.

The book after Musa that came with such a description is the Quran - book revealed to Muhammad:

“Blessed is He who sent down al-Furqan upon His Servant that he may be to the worlds a warner” (25:1)

Jesus’ book was not given such description because its tashree’at (commandments) are not extensive, to the level of Musa. Hence, the following verses speak of the Torah as the ‘kitab’ that came before Muhammad. Not the Injeel:

“So is one who [stands] upon a clear evidence from his Lord [like the aforementioned]? And a witness from Him follows it, and before it was the Scripture of Moses to lead and as mercy.” (11:17)

The Scripture of Musa led the people and was mercy upon the people, same description about the Quran in other verses.

“And before it was the scripture of Moses to lead and as a mercy. And this is a confirming Book in an Arabic tongue to warn those who have wronged and as good tidings to the doers of good” (46:12)

“They said, "O our people, indeed we have heard a [recited] Book revealed after Moses confirming what was before it which guides to the truth and to a straight path.” (46:30)

So much was the book of Musa extensive, that the jinn heard of it as 46:30 shows - just like the book of Muhammad was heard. But not the Injil of Isa.

Before this great and extensive message of Musa, the “former generations” lived.

B. Why are the former generations significant?

Before the extensive commandments of Musa were revealed, there was no codified laws imposed upon a society similar to the Sharia of prophet Muhammad.

The sharia of Muhammad for example not only  appeals to people’s free will and reasoning to instruct them not to steal. The thief’s hand is also subjected to hudud and is chopped accordingly (if the sin satisfies the standards of the hadd).

The Sharia takes away your will if necessary (such as if you’re a criminal), and makes your will subordinate to it.

However before Musa, people were subjected to mere preaching (for the most part, with arguably Abraham as an exception).

Thus, these ‘former generations’ of Musa faced great tribulations than the people after Musa.

Because hudud imposed on the people is a kafara upon the people from their sin - that cleanses them in Allah’s eyes (provided they are believers).

Previous people had nothing pressuring them to be righteous except fear of Allah. That’s why former generations are rewarded in a higher status than later generations.

These verses highlight this:

And as we know, Sayyida Fatima was the “master of women of the worlds in both the former peoples and later peoples”, as reported in Al-Amali by Shaykh al-Saduq. (1)

She was the master of the ‘former [believing] peoples’, despite her body physically not coming to existence yet - but her light was created before mankind was created, as known from Shi’i reports.

So, just like Allah orders all previous prophets (and their ummahs) to support and believe Prophet Muhammad when he rises:

“And [recall, O People of the Scripture], when Allah took the covenant of the prophets, [saying], "Whatever I give you of the Scripture and wisdom and then there comes to you a messenger confirming what is with you, you [must] believe in him and support him." [Allah] said, "Have you acknowledged and taken upon that My commitment?" They said, "We have acknowledged it." He said, "Then bear witness, and I am with you among the witnesses." (3:81)

The ma’rifa of previous prophets & their ummahs revolved around a single messenger (Muhammad) who had not yet come - such that Allah took a covenant from them upon it. And Himself was a witness to this commandment, making the prophets and their ummahs acknowledge the covenant and take that as a commitment.

Thus, the ma’rifa of Fatima - who was the ‘master of the women of the worlds of the former [believing] peoples’ - whom are rewarded by Allah higher in heaven than those who came later - was something Allah obliged upon prophets of the former peoples and their ummahs. As the hadith indicates.

This is what I think