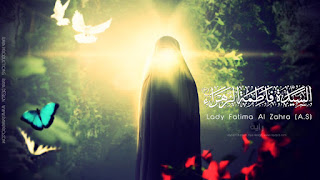 I wish you all are in good health and prosperity.

Today’s post will be about a hadith which a kind brother has suggested that I provide my thoughts. A hadith so intriguing and thought inspiring, such that it makes us take a step back and ask ourselves:

Can we ever know the true extent of the supernatural powers bestowed upon our 14 Ma’sumeen (infallibles)?

That is a question one can ponder and ponder, but cannot truly say they’ve come to a conclusion to. And there will be another post regarding this topic.

But for the purpose of this post, I will simply analyze a number of ahadith that bring this question come to life.

So without much adue..

The status of Fatima?

Firstly, the hadith that will be discussed is present in the tafsir compendium of one of the prominent Imami mufasirun of the 300s AH - known as Tafsir Furat al-Kufi.

“Narrated on the authority of Aba Abdilah [al-Sadiq] (as), that he said:

Whoever has ma’rifa of Fatima [realizing the spiritual truth that defines her] in the way that fulfills her right, then he has realized the Night of al-Qadr.

And indeed, she was named Fatima because the creation were prevented فطموا [futimu] from have true ma’rifa of her’ (1)

It is reported in Basa’ir al-Darajat by Shaykh al-Saffar al-Qummi (2), a 10th century CE Imam book of hadith, that the Quran was revealed in the following manner:

“I asked Abi Jafar [al-Baqir] (as) about this narration:

‘There is no verse in the Quran except that it has a dhahr [apparent part] and a batn [interior, esoteric part]’.

It [i.e, the Quran with its batn and dhahr] includes what has passed, and what has not happened yet. It runs [on its course] like the Sun and the Moon...”

Looking at this hadith, the main distinction it makes is that the Quran does not consist merely of its dhahr, its tanzeel (apparent revelation).

Meaning, the Quran does not simply consist of the verses that are available to us as commoner Muslims. And the ahkam they offer us.

This is the verse as was revealed to commoner Muslims. And the hukm it carried is to not kill game in the state of ihram.

This is the tanzeel / dhahr form of the verse, the part of the verse & its commandment that is apparent to commoner Muslims, as was revealed to them by the Prophet.

Now, each verse has a tanzeel / dhahr form but it also has a ta’wil (esoteric interpretation) / batn (interior, esoteric form).

The ta’wil of each verse is known only to Allah and those “firm in knowledge”, whom our ahadith define as the Ma’sumeen of Ahlulbayt - as reported in al-Kafi (3).

Because the ta’wil is known only to Allah & Ahlulbayt - it is a form of secret knowledge.

Which the Ahlulbayt chose to share with their followers

Just like al-Ghayb (knowledge of unseen) is known only to Allah & his messengers, but Allah chose to have his share some of this hidden knowledge with his creation via his messenger’s tongue. (72:26-28)

Such as Allah telling us the fate of Abu Lahab in hell, even during Abu Lahab’s lifetime. A form of ghayb knowledge Allah shared with us, fallibles.

Being so, Fatima being defined as ‘Laylat al-Qadr’ is a form of batini / ta’wil revelation of Surah 97.

Secret knowledge that the Imams shared with us, which is equal to the dhahir forms of the verse.

Seeing Fatima as Laylat al-Qadr from a non-batini lens

In these two holy verses, Prophet Abraham & Lut are described “migrating [to their] Lord” and “going to [their] Lord”.

These prophets migrated from their lands to Palestine.

Allah, of course, is not limited to a physical location - as per Shi’i belief. Allah is not located within Palestine for these prophets to migrate to Him there.

Rather, the implementation of Sharia law there & Allah’s message is why Allah defined Palestine as Himself.

Similarly, the utmost greatness of Laylat al-Qadr and its indispensibility to Islam - such that Islam wouldn’t have come, had it not been for this night.

Thus, Fatima being Laylat al-Qadr meaning she is the door (bab) and path that existed so the divine revelation of the Quran takes place.

So never forget your door, O Shia of Al Muhammad.

To understand the implications of Sayyida Fatima’s status as “Night of al-Qadr”, we must first refer to Surah 97 which speaks of this night.

Let us begin our analysis by taking a look at the first verse:

The ‘Night of al-Qadr’ refers to the night Allah sent his mercy [the message & decrees of of Islam] to all of mankind.

The night Allah (سبحانه وتعالى) “sent down the al-Furqan [the Quran] upon His Servant that he may be to the worlds a warner.” (25:1)

The ‘worlds’ referring to mankind & jinn, among other sentient beings subject to Allah’s judgement - “whoever is in the heavens and whoever is on the earth” (27:87).

It is the night which defined the fate of Allah’s creation forever.

For it is the night Allah introduced a form of balance [al-Qadr] to His creation, which fulfills them and  brings the “[spiritually] dead” back to life.

“And is one who was dead and We gave him life and made for him light by which to walk among the people like one who is in darkness, never to emerge therefrom?” (6:122)

The balance introduced in this night was through the decrees Allah introduced [Sharia & message of Muhammad].

It is a return to the fulfilled, balanced nature to which Allah’s creation were made:

In essence, Laylat al-Qadr was the night that brought us closest to God - more than our ancestors ever were. It brought us in the nature Allah created us. It fulfilled us. It made us alive.

Without it, we Muslims are nothing.

Perceiving the Night of al-Qadr

“The angels and the Spirit [i.e., Gabriel] descend therein by permission of their Lord for every matter” (97:4)

The Night of al-Qadr is incomprehensible to the regular human mind, as 97:2 suggests and discussed in the previous section.

It is “better than a thousand months [of worship]” (97:3), a definition that can be illuminated in the following hadith in al-Kafi (4):

“Allah would not accept a [good] action except if it is done while holding wilayah for Ahlulbayt. Indeed, and whom ever has ma’rifa of our right or sought reward through us.. [then his deed is accepted & rewarded, as suggested bt hadith]”.

Only while having ma’rifah for Ahl Bayt al-Ismah, the 14 infallibles (including Fatima), are our deeds accepted.

So this mere belief and knowledge is better 1000 months of worship.

In this Night, the angels and Gabriel descend and convey the teachings of their Lord.

“The angels and the Spirit [i.e., Gabriel] descend therein by permission of their Lord for every matter” (97:4)

This reminisces on the title of Sayyida Fatima as a ‘muhdatha’ (one spoken to by angels) and given divine knowledge, as evident of the existence of Mushaf Fatima which is in the hands of our Twelfth Imam.

May Allah keep us all firm in the service of our master Fatima.