The Prophet’s Exploited Will 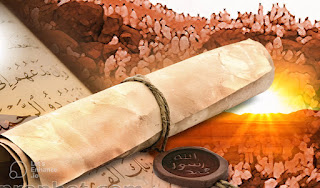 Poignance and audible weeping filled the streets of Ancient Egypt.

Yusuf al-Sideeq, prophet of God and wise vizier to the Egyptian king, was on his deathbed.

He was the man who brought rank and status to the Children of Israel, taking them from the deserts of Canaan to the glory of pharaonic Egypt.

How will the Israelites survive after this? They were undoubtedly outnumbered by their Egyptian peers, and an evitable social clash will occur between the natives and the Judaic newcomers.

Such conflict in those days typically resulted in economic hardship, enslavement, and social discrimination - for the losing side.

Prophet Yusuf (as) recognized these anxieties among Banu Israel and so when he neared death, he called his followers and family near his side and informed them of their fate and duties for the future.

Imam al-Sajjad (as) - narrating from Rasul Allah - records for us prophet Yusuf’s exchange with Banu Israel in the following hadith:

“When death approached Yusuf, peace be upon him, he gathered his followers and his family.

He began by praising God, then he spoke to (the Banu Israel) of a severity that would strike them henceforth.

Their men would be killed, their pregnant women’s stomachs would be cut open, and infants would be slaughtered.

This will be the case until God reveals the truth through a man from the children of Levi the son of Jacob. He will be a tall brown man, and he told them of his name [i.e, Musa ibn Amran], so they continued waiting for a man with those attributes.

Hardship and distress befell the Children of Israel while they were waiting for the rise of the Qa’im for four hundred years.”

With that said and relating to our modern world, we find shrewd businessmen often speaking of a common adage:

‘The best opportunities come in time of crisis’

In those 400 years of hardship, poverty-struck Israelites sought to exploit the hardship of their Israelite brothers for their personal benefit.

They sought leadership, glory, and position among their ethnoreligious kin.

How could they plausibly gain such position, when they are commoners themselves?

Simple. Just claim to be the prophesied Musa ibn Amran!

“Prophet Musa did not emerge until fifty liars from the Children of Israel came out before him, all of them claiming that they are Musa ibn Amran”

One would be sorely mistaken to believe such incidents would not recur among the Shi’a.

After all, Imam al-Sadiq said:

“What is recorded in the books as occuring in Bani Israel - narrate it as having occured in this ummah, and you do not sin by doing so.”

Given its precedence in Bani Israel - the cycle of false pretenders shall never cease to occur in the ummah of Muhammad.

Thus, our discussion in this article shall center on a very important keynote exploited by deviant groups:

Can a person claim to be prophesied in the Will of the Prophet, because his name matches the name in the will?

The answer to this may seem like common sense to many of us - and it is a resounding negative.

However, one would be surprised as to the amount of people who are unfortunately convinced by such argumentation on the line of – “My name is mentioned in the Will, thus I am an infallible.”

Let us see what our holy Imams have to say about this issue!

On the night of his death, the Holy Prophet brought Imam Ali to his side and informed him of future events vital for the Shi’a of Ali and the Islamic ummah as a whole.

After the demise of those Twelve Imams, Twelve pious rulers will take their place - the ‘Twelve Mahdis’.

The first of these Mahdis will receive rulership from his father, the Twelfth Imam.

The report culminates with an important piece of detail:

“He has three names: My name, name of my father: Abdullah and Ahmad; and third will be Mahdi and he will be the first of the believers”

These were the twelve Imams and after them there will be twelve Mahdis. When the last moments of the twelfth Imam will approach, he will hand it over to his son, who is the foremost proximate; and he has three names: My name, name of my father: Abdullah and Ahmad; and third will be Mahdi and he will be the first of the believers.”

While the reader may be inclined to understand the exact role, function, and significance of the “Twelve Mahdis” –

We shall abstain from discussing it in this article to avoid straying from the main topic of discussion.

Can a person named Ahmad, for example, claimed to be the prophesied ‘Ahmad’ in the will and assume his position?

The answer to this lies in two key points:

Firstly, I have ceased above from clarifying who the pronoun “he” refers to in the sentence “He has three names: My name, name of my father: Abdullah and Ahmad; and third will be Mahdi”.

And I have done so for a very specific purpose.

Deviant groups assume those names are the literal names of the son of the Twelfth Imam, Muhammad ibn al-Hasan.

However, a careful study of the ahadith on this matter show these “names” are nothing more than nicknames for the Mahdi (Twelfth Imam) himself.

“Narrated Huzaifah that he said:

I heard the Messenger of Allah (s) say when Imam Mahdi (a.s) was mentioned in his presence: “Indeed his allegiance will be given between Rukn and Maqam. He has three names: Ahmad, Abdullah and Mahdi.””

This hadith is from al-Ghayba of al-Tusi, just like the hadith before it.

Both mention the “three names: Ahmad, Abdullah, and al-Mahdi”.

Except the second hadith is more clear in whom the pronoun “he” refers to, the Mahdi himself to whom the Shi’a will give allegiance - not his son.

Is it an established characteristic of the Mahdi to have three names?

The answer to this is that these ‘names’ are not literal names, but attributes / nicknames.

To demonstrate; we know the Mahdi’s name is Muhammad but he was also nicknamed “Ja’far”.

“Yesterday, a newborn was born to Abi Muhammad [Imam al-Askari], peace be upon him, in the house, and he was ordered to conceal it. I said: What is his name?

He said: ‘He was named Muhammad and nicknamed Ja’far’

One now may ask - if ‘Ahmad’, ‘Abdullah’ and ‘al-Mahdi’ are merely attributes and not literal names.

Then why would the hadith describe them as ‘names’ (asma’)?

The answer to this is that the word “asma’” and its derivatives do not necessarily refer to a literal name.

Undoubtedly these are all attributes of God and are not his literal, personal names.

Such is the case of the “three names” of the Mahdi, they are his attributes / nicknames - just like “Ja’far” is his nickname.

But what is the evidence this is how the hadith was understood by early Shi’a?

That these three names are attributes of the Mahdi but are not his literal names?

We see that Imam al-Sadiq calls al-Kadhim by the name “Ahmad”.

When told by his companions that al-Kadhim’s name is not “Ahmad”, Imam al-Sadiq replied by saying:

“Rather, his name is Ahmad and Muhammad.”

This shows that as the Qa’im, the Waqifa understood that al-Kadhim would have had nicknames such as “Ahmad and Muhammad”.

In a similar light, Twelvers would have understood their Qa’im as having nicknames and attributes such as “Ja’far”, “Ahmad”, “Abdullah”, and “al-Mahdi”.

“Narrated to me Ibrahim bin Muhammad bin Humran and Humran Haitham bin Waqid Jazari from Abdullah Rajani that he said: I was with Imam Ja’far Sadiq (a.s) when Abd Salih [Imam al-Kadhim] (as) entered upon him, so Imam Al-Sadiq (as) said to him: “O Ahmad, do that.” So I said to Imam Al-Sadiq (as): His name is not Ahmad.

So the Imam (as) said: “Rather, his name is Ahmad and Muhammad.”

Then he (as) said to me: “O Abdullah, the companion of this matter will be taken away (the Mahdi) so he will be imprisoned, and his imprisonment will be long. So if they approach (or determine to eliminate) him he will make Dua’ by the Greater Name of Allah, so Allah will save him from between their hands.”

Therefore, contextual evidence and parallel ahadith give us a strong inclination to believe that the Mahdi (not his son) is the one who possesss three attributes / nicknames:

Perhaps this play on names draws parallel to the Sunni hadith stating:

The Prophet (ﷺ) said: If only one day of this world remained. Allah would lengthen that day (according to the version of Za'idah), till He raised up in it a man who belongs to me or to my family whose name is the same as mine and his father's name is the same as my father's”

The Mahdi in Sunni millennarian perspective is a man named ‘Muhammad ibn Abdullah’.

The Twelver Mahdi evidently cannot have such a literal name, as he is “Muhammad ibn al-Hasan”.

Thus, to carve Muhammad ibn al-Hasan as the fulfillment of even the Sunni prophecy - the Ghayba of al-Tusi hadith says:

“And he (i.e, the Mahdi) has three names: My name, name of my father: Abdullah and Ahmad; and third will be Mahdi and he will be the first of the believers.”

His nickname is Ahmad (just like the prophet’s nickname, Ahmad)

His nickname is al-Mahdi (to reflect he is the Qa’im).

Thus, Muhammad ibn al-Hasan would be the prophesied Mahdi to both the Shi’a and Mukhalifeen!

Our second point lies in the fact that if we disregard everything written above.

And insist the pronoun “he” in the will of the Prophet refers to the son of the Mahdi.

And that the son of the Mahdi has three literal names.

This does not mean that anyone whose name matches thst of the Mahdi’s son can legitimately claim to be him.

“On the authority of Yazid ibn Abi Hazim, he said:

I left Kufa, and when I came to Medina, I entered upon Abi Abdullah (al-Sadiq) and greeted him.

He asked me: Did anyone accompany you in your journey?

He said: Did you speak?

I said: Yes, a man from among the Zaydis accompanied me.

He said: What was he saying?

So I said to him in the answer:

If you take names as evidence, then among the sons of Husayn is (peace be upon him) Muhammad ibn Abdullah ibn Ali..”

We can see that Imam al-Sadiq clearly rejects the notion of parallel names as being evidence that one fulfills a prophecy.

Just because someone’s name is “Ahmad” and claims the will of the prophet - doesn’t mean he is in fact the “Ahmad” of the will.

This is why when Muhammad ibn Abdullah (al-Nafs al-Zakiyya) claimed to be the Qa’im based on the hadith of Rasul Allah which states,

Imam al-Sadiq rejected Muhammad’s claim and approved of the narrator in saying that others have such name as well and they are not the Mahdi.

Thus, using the argument of matching names to claim the will of the Prophet cannot be seen as true and valid evidence (according to the method of Ahlulbayt).

May Allah bless you all